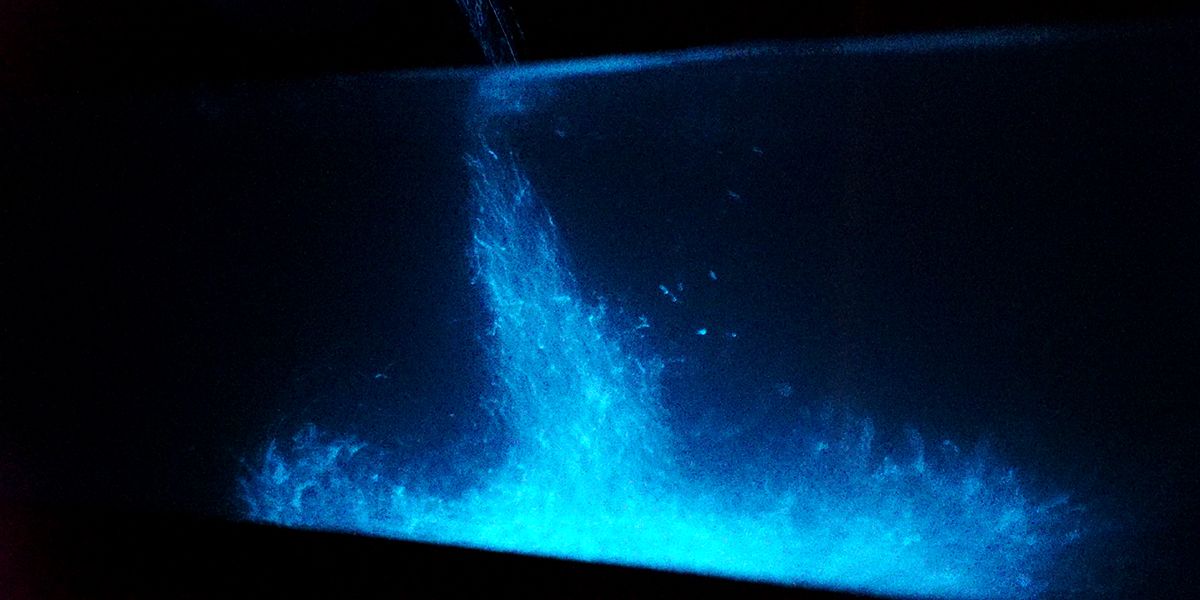 “Saltwater dripping into a tank, in a rectangle, on a table, in a room, inside the loft” is an experiential installation where saltwater is being dripped from the ceiling into a tank of bioluminescent algae below that is situated in the center of a completely dark, light-sealed room. The room is intended as a quiet contemplation and meditation space where the only sound being heard is the dripping water and the only visible light is emanating from the glowing algae. Saltwater was shown as part of the group exhibition “Personal Statements” at Stanford University.
SHOW ME!

Since the room was so dark, it was nearly impossible to photograph or record anything when the piece was shown as intended. Luckily, my buddy Scott was armed with a Sony A7r camera and was able to capture some videos of me transferring the algae into the 10 gallon tank.

Life: This is me pouring multiple jugs of 2 liter bottles of algae into the 10 gallon tank.

Death: Throwing algae down the drain might create unwanted algae blooms so I had to kill the algae. This is me pouring 1 gallon of vinegar into the tank after the exhibition was over.

When a person enters the installation, they become isolated from the outside world both visually and aurally in the dark room. The participant’s attention is then drawn to the sound of the dripping water at first and as their eyes adjust to the darkness, they being to see the algae glow that is caused by the mechanical disturbance of the dripping water. Then slowly, they begin to see a thin glowing line in the shape of a rectangle that outlines the tank of algae.

This is the floorplan of the room.

The isolation is meant to take away outside distractions allowing the dripping water and glowing algae to draw attention to itself. Since the room is so dark, the tank is imperceivable. The bioluminescent algae used is a single cell organism and only glows when mechanically disturbed. It is hard to discern the individual cells with the naked eye but when the algae glows, it reveals itself in the form of tiny individual blue “sparks”, clearly visible without any visual aid.

The algae being disturbed by stirring. The white rectangular outline is projected from a laser projector hidden in the ceiling.

While designing Saltwater, there were elements that I wanted to incorporate:

Nature:
The algae, water as a medium.

Light:
Artificial vs natural ( what we experience everyday vs rarely experienced ).

Macro / Micro scale:
The single cell algae and the name full name of the piece suggests the different scale at which your experience takes place.

There is no definitive meaning to the piece and it is up to the participant to derive their own meaning from the sum of their experience. The elements that is part of the installation are merely tools to help the participant contemplate about whatever it is that is on their mind at that very moment. I have received feedback regarding Saltwater ranging from “I don’t get it”, “Bioluminescent algae is dope!” to “...a surreal experience when I am standing alone hearing the water drops and seeing the algae in the room”.

This is me presenting my piece.

The tank half filled with algae the night before the show. The algae had to be kept in a regular light / dark cycle hence the light.

Pure cultures of bioluminescent algae are quite costly. I bought a 250ml bottle for $40 for experimentation. The culture looked clean the density was ok. While designing Saltwater, I figured I needed to fill at a 10 gallon tank and at least 4 times the cell density than what I saw in the 250ml bottle. Bulk cultures can be had for $120 per 1000ml and since I needed 10 gallons, that is $4536!! This was way beyond my budget and I needed a large amount of algae so I decided to grow my own.

The 250ml bottle came with instructions on how to sustain the algae culture and after a week it became a little brighter and was noticeably a little denser. I had a little over 5 weeks so I had to grow these little guys fast. I did a ton of research digging through some science papers and came across a handful that were extremely helpful.

Armed with some real scientific knowledge, I was ready to grow some mutant algae! The algae’s circadian rhythm is 12 hours darkness and 12 hours of light and they only glow in their dark period and glow the brightest 3 hours into their dark period. I had to shift their cycles by 3 hours so that their dark cycle will align with the exhibition. Their photosynthetic response to different wavelengths of light is similar to that of plants so to achieve maximum efficiency and growth rate, I used red and blue LEDs. All of this gave birth to AlgaeLab 1.0.

This is AlgaeLab 1.0. The red / blue LED lights is controlled by a MCU and contains a RTC to control the on / off period of the lights.

Six 1 watt high-powered LEDs are mounting on a heatsink. The fan is for air circulation.

This bin can hold four 1 gallon jugs. After about a week, the growth rate was ok but it was still too slow. The slow growth rate was due to the cold temperatures at night. Bioluminescent algae divide very slowly in cool temperatures but will die when it is too high. In addition, the LEDs were not bright enough.

I still had to solve the fluctuating temperature problem and I need brighter LEDs and a larger cabinet to hold 10x 1 gallon jugs. The stars aligned and I was able to find this cabinet at the as-is section of Ikea for 10 dollars:

Heat mats were used to keep the algae warm. Four 120mm fans were attached to the vents for air circulation. A small space heater was added later so warm air would circulate at night.

12x 5 watt high-powered LEDs were attached to the top panels of the cabinet.

This is the power supply, RTC and MCU. The MCU controls the lights and heaters via the remote controled powerstrip. Two temperature probes are attached to the MCU so proper temperature can be maintained by turning the heaters on and off.

This is AlgaeLab 2.0 in full operation:

This is how dense the algae cultures were in the 4th week:

While the algae was floating around and getting fat, I had to build the light-sealed room.

Taping out the space for the room.

Putting up the walls.

Walls on the inside of the room.

Walls are up. Time to paint it black!

Recruited some buddies to help me paint.

Thank you to Scott Moon for the photos and video!